Node.js Streams come with a great power: You have an asynchronous way of dealing with input and output, and you can transform data in independent steps. In this tutorial, I'll walk you through the theory, and teach you how to use object stream transformables, just like Gulp does.

When I was researching for my book Front-End Tooling with Gulp, Bower and Yeoman, I decided to not just explain APIs and use cases, but also focus on the concepts underneath.

You know that especially in JavaScript, tools and frameworks come and go faster than you can register domains and Github groups for them. For Gulp.js, one of the most crucial concepts are streams!

Some 50 years of streams

With Gulp, you want to read input files and transform them into the desired output, loading lots of JavaScript files and combining them into one. The Gulp API provides some methods for reading, transforming, and writing files, all using streams under the hood.

Streams are a fairly old concept in computing, originating from the early Unix days in the 1960s.

"A stream is a sequence of data coming over time from a source and running to a destination." via @ddprrt

The source can be of multiple types: files, the computer’s memory, or input devices like a keyboard or a mouse.

Once a stream is opened, data flows in chunks from its origin to the process consuming it. Coming from a file, every character or byte would be read one at a time; coming from the keyboard, every keystroke would transmit data over the stream.

The biggest advantage compared to loading all the data at once is that, in theory, the input can be endless and without limits.

Coming from a keyboard, that makes total sense - why should anybody close the input stream you’re using to control your computer?

Input streams are also called readable streams, indicating that they’re meant to read data from a source. On the other hand, there are outbound streams or destinations; they can also be files or some place in memory, but also output devices like the command line, a printer, or your screen.

They’re also called writeable streams, meaning that they’re meant to store the data that comes over the stream. The figure below illustrates how streams work. 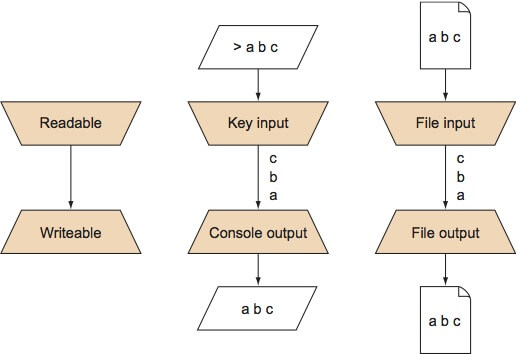 The data is a sequence of elements made available over time (like characters or bytes).

Readable & writeable streams can be interchanged: keyboard input can end up in a file, file input on the commandline

Not only is it possible to have an endless amount of input, but you also can combine different readable and writeable streams. Key input can be directly stored into a file, or you can print file input out to the command line or even a connected printer. The interface stays the same no matter what the sources or destinations are.

The easiest program in Node.js involving streams is piping the standard key input to the standard output, the console:

Take the request package for example, where you can do an HTTP request to a URL. Why not fetching some page on the web and printing it out on process.stdin?

The output of an HTML page might not be particularly useful on a console but think of it being piped to a file for a web scraper.

With the data exposed once a stream is opened, developers can transform the data that comes from the stream before it reaches its destination, such as by transforming all lowercase characters in a file to uppercase characters.

This is one of the greatest powers of streams. Once a stream is opened and you can read the data piece by piece, you can slot different programs in between. The figure below illustrates this process. 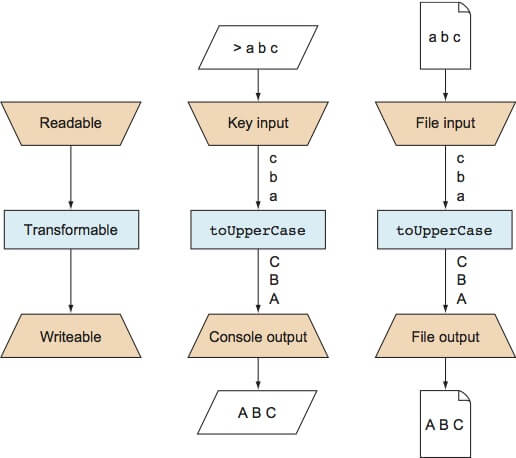 To modify data, you add transformation blocks between the input and the output.

In this example, you get your input data from different sources and channel it through a toUpperCase transformation. This changes lowercase characters to their uppercase equivalent. Those blocks can be defined once and reused for different input origins and outputs.

In the following listing, we define a toUpperCase function that -- well -- transforms every letter to its uppercase equivalent. There are many ways to create this functionality, but I've always been a huge fan of the Node.js streaming packages like through2. They define a good wrapper to make creating new transformables in a breeze:

This is totally in the vein of functional programming. We can use and reuse the same transformable for every other input or output, as long as it's coming from a readable stream. We don't care about the input source or the output. Also, we are not limited to one single transformable. We can chain as many transformables as we like:

If you are familiar with Gulp, the code above should ring some bell. Very similar, isn't it? However, Gulp streams are different in one specific matter: We don't pass data in Buffers, we use plain, old JavaScript objects.

In standard streams, it’s usual to see the file just as a possible input source for the real data, which has to be processed. All information on the origin, like the path or filename, is lost once the stream has opened up.

In Gulp, you’re not just working with the contents of one or a few files, you need filename and the origin of the file system as well.

Think of having 20 JavaScript files and wanting to minify them. You’d have to remember each filename separately and keep track of which data belongs to which file to restore a connection once the output (the minified files of the same name) must be saved.

Luckily, Gulp takes care of that for you by creating both a new input source and a data type that can be used for your streams: virtual file objects.

Once a Gulp stream is opened, all the original, physical files are wrapped in such a virtual file object and handled in the virtual file system, or Vinyl, as the corresponding software is called in Gulp.

Vinyl objects, the file objects of your virtual file system, contain two types of information: the path where the file originated, which becomes the file’s name, as well as a stream exposing the file’s contents. Those virtual files are stored in your computer’s memory, known for being the fastest way to process data.

There all the modifications are done that would usually be made on your hard disk. By keeping everything in memory and not having to perform expensive read and write operations in between processes, Gulp can make changes extraordinarily quickly.

Internally, Gulp is using object streams to emit file by file into the processing pipeline. Object streams behave just like normal streams, but instead of Buffers and strings, we pass through plain old JavaScript objects.

We can create our own readable object stream using the readable-stream package:

A note on stream packages in Node.js

You might have noticed that we use different stream packages that are installable via NPM. Isn't that odd?

"Streams are so crucial for asynchronous IO, shouldn't they be part of @nodejs core? Well, they are." via @ddprrt

However, the streaming core was constantly subject to change back in the old 0.x days of Node, that's why the community stepped in and created a solid and stable API around the basic packages. With semantic versioning, you can be sure that the streaming ecosystem moves nicely along with your application.

Enough demos. Let's do something real

Alright! Let's go for a small app that reads CSV data and stores them into JSON. We want to use object streams because at some points we might want to change data depending on the use case. Since streams are awesome, we want to be able to push the result to different output formats.

CSV is great for parsing because it follows a very easy to understand format: A comma means a new cell. A line means a new row.

That's all it needs to create JavaScript objects out of a CSV file!

Once we have everything available in objects, we can transform the data much easier. Delete properties, add new ones; filter, map and reduce. Anything you like. For this example, we want to keep it easy: Pick the first 10 entries:

Again, like in the previous example: Passing data for the second argument of a callback means that we keep the element in the stream. Passing null means that we throw the data away. This is crucial for filters!

Flushing to a JSON

So, what we want to do with the objects in our stream is to collect all of them that are passing through, and store them into a single string representation. JSON.stringify comes into mind.

One important thing you have to know when working with streams is that once the object (or Buffer data for that matter) passes through your transformable to the next stage, it's gone for this stage.

This also means that you can pass objects just to one writeable, not more. There is, however, a way of collecting data and doing something different with it. If there's no more data coming through a stream, each transformable calls a flush method.

Think of a sink that's getting filled with fluids.

You are not able to pick every single drop of it and analyze it again. But you can flush the whole thing to the next stage. This is what we're doing with the next transformable toJSON:

Gulp, for example, uses this behavior when working with concatenation plugins. Reading all files in stage one, and then flushing one single file to the next stage.

Functional programming comes into mind again: Each transformable that we've written in the last couple of lines is completely separated from the others. And they are perfectly reusable for different scenarios, regardless of input data or output format.

The only constraints are in the format of CSV (the first line is the headline) and that pickFirst10 and toJSON need JavaScript objects as input. Let's combine them and put the first ten entries as JSON on our standard console output:

Perfect! We can pipe the whole lot to different writeables, though. In Node.js, the core IO is all compatible with streams. So let's use a quick HTTP server and pipe everything out into the internet:

This is the great power of Node.js streams. You have an asynchronous way of dealing with input and output, and you can transform data in independent steps. With object streams, you can leverage JavaScript objects that you know and love to transform your data.

This is the foundation of Gulp as a streaming build system, but also a great tool for your everyday development.

If you are hooked on streams, I can recommend a few resources: